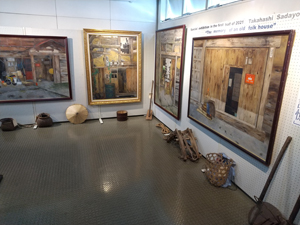 In 2020, our lives have dramatically changed. In the Snow Country Museum, we had welcomed many visitors from overseas before but today the museum is open very quietly. We hope the tourists will be back soon, although it seems difficult for this situation to improve immediately.
If the situation changes, the Snow Country Museum must also change. With that in mind, we decided to publish this special exhibition on the Internet. English and Korean are also available. The translation is courtesy of Ms. Mayu Tatsuki (English) and Ms. Kyomi Lee (Korean).
The exhibition was supported by Mr. Sadayoshi Takahashi, Mr. Kazuo Nagumo, and Mr. Sumiko Suzuki. I would like to thank everyone.

Sadayoshi Takahashi Exhibition   “The memory of an old folk house”

From Thursday, April 1 to Tuesday, September 28

Today old folk houses have disappeared from the Uonuma area and now it is a world that can only be remembered. Removing snow from houses is a serious problem in this snowy area. In addition to the raised-floor style housings, roofs designed for the snow to free fall or to melt, and housing designed for daylighting are crucial for us living in this area in search of a comfortable life.
Even young people who have never seen the scenery back in the old days or those who live far from this area, we believe everyone has a feeling of nostalgia for old sceneries. Now that the scenery has become only in our memory, we would like to hold this special exhibition with the hope that it will bereproduced in the world of painting. 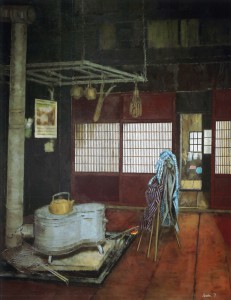 When I saw the inside of the house where a woman in her 80s, Taka Koshigoe, was living in, there was a stove that burns firewood in the hearth and a ‘suiban’ (kitchen) in the back right, so the state of old life remained. That inspired me to draw. Looking at the hearth reminds me of my childhood. In the old days, I put an iron tool called ‘Watashi’ in the hearth and grilled rice balls and rice cakes to eat. I remember that the miso-zuke (pickled miso) was chopped into the grilled rice balls and it was very delicious. 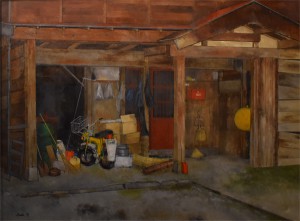 Under the eaves of a farmhouse

In the old days, the place that used to be for keeping a horse now is used as a storeroom. And various things necessary for farm work were stored in it. You can see how they live as a farmer.

The walls of the house were decaying but I could see the switchboards for electricity and I could feel the traces of a living. The architectural style at that time can no longer be found in modern architecture. I drew it because I wanted to keep the old architecture as a picture.
（Stored: Yuzawa Town, Mr. Yoshiharu Kenmochi,） 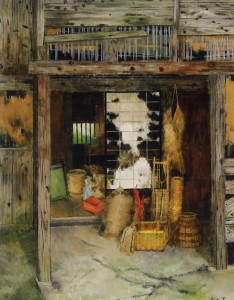 The house was built when it was settled after the war and was abandoned at that time. I wanted to recreate the way they lived, so I drew the place for keeping a horse and the tools of old life in the picture. 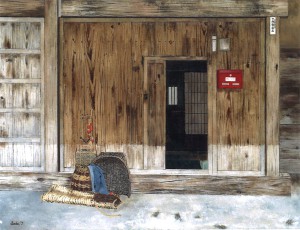 In the old days, houses that kept horses as livestock used to open large doors when taking in-out horses from the house and to use a‘kuguri’ (side) door in their daily lives. This ‘kuguri’ door system was not seen in every house, thus, was a rare structure even at that time. It was believed that it was useful for crime prevention because a person cannot go through the ‘kuguri’ door when carrying a rice bale. 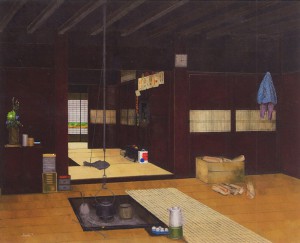 It is difficult to find an old folk house in these days, so I visited Minakami Town in the neighbouring prefecture and was able to come across this historic house.When I saw the scene of boiling water in an iron kettle hung in the hearth and making tea,
I recognized that it was a part of the “good old house” I was looking for, so I drew it. The building was designated as an important cultural property by the town in 2014. 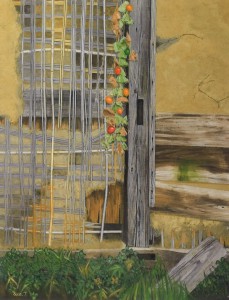 I happened to find an old folk house whose owner is not known and decided to draw the house. ‘Komai’ (lath) in the decayed wall is knitted with reeds. ’Komai’ in the area southern than Yuzawa town uses bamboo and wood. What hangs down is the Japanese snake gourd. 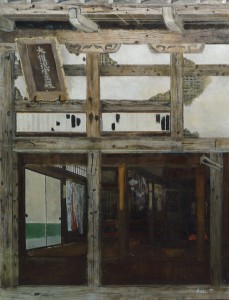 While searching around for an old building, I found this building and thought at a glance that it was a historic building. The 69th priest had died, and a widowed woman in her 80s was living in the building. The left side of the picture is a shrine. It is unusual for shrines and temples to be integrated into one building. It is now an abandoned temple. The following year, I drew the Buddhist altar. 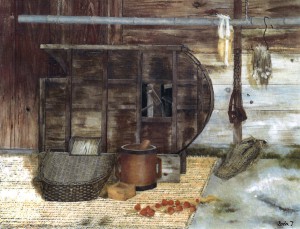 I placed a winnowing and an 18-litre container beside the entrance of an old folk house with a thatched roof. I drew a picture of harvesting grains. The winnowing is an old-fashioned tool used to remove dust from threshed rice husks. Wild rocambole and corn were hung on a bamboo pole and a trap for hunting was hung on the wall. 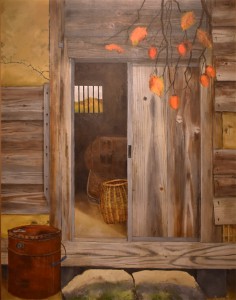 When I visited Sakae Village in Nagano prefecture, where I spent the upper grades of elementary school, I found an old barn in Tsunan town next to Sakae village. Since the door was left open, I could see the stored farm tools, and stones were lined up on the upstairs near the entrance.
The wallboard that covers the earthen wall is partially peeled off, but the wood grain of the door and wallboard allows you to feel the transition of time. 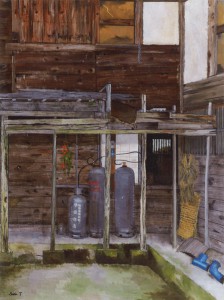 There is a rice field around the house, and the place where the gas container is placed was used as a back door. I felt the age of the old-fashioned wooden wall and the enclosure material that protects the gas container from the wind and snow. So I decided to draw it with Mino and Goza on the wall on the right. The roof was covered with wood and stones for the weight.